World, meet Blanche. (Yes, she was named after the Golden Girl of the same name.) She’s 14 years old, and she has a growing collection of cozy dog sweaters.

Blanche didn’t always live a life of coziness, though. She was an owner turn-in at the Baldwin Park Animal Shelter in Baldwin Park, California, in October 2017, according to The Dodo. She had shown signs of neglect, was underweight, missing most of her fur, had severe dental problems, and her nails were overgrown. She was set to be euthanized when local rescue group Marley’s Mutts stepped in and started nursing her back to health.

When volunteers for Marley’s Mutts took her to the vet, she was diagnosed with mammary cancer that couldn’t be surgically removed (though luckily is slow growing), and Cushing’s disease, a condition in which the adrenal glands make too much cortisol. To make her more comfortable while caring for her many ailments, the rescue sent out a request on Facebook for dog sweaters to keep Blanche warm. Fans of the group, referred to as the “Mutt Militia,” certainly delivered, with some sending in hand-knitted sweaters for Blanche to curl up in.

Amy Klein, who was Blanche’s foster mom, told The Dodo, “I find her all the time hiding under spare blankets in the closet or deep under the covers.”

In addition to being cared for and loved and fully clothed, Blanche has also found her forever home! She was adopted by Patricia Cook of Bakersfield, California, and her husband.

Blanche was adopted!!! And by Marley’s Mutts Alumni no less! Thank you to Amy and all of our fosters who hold these little lives until they are ready to go. It ain’t easy but it saves lives!

“I felt so sorry for her and she just grabbed at my heart. Well, I mean they all do, but there was something special about her,” Cook told The Dodo. And her new mom totally respects Blanche’s sweater game, and is planning to continue adding to her adorable wardrobe.

“She has more clothing than I do,” Cook says. 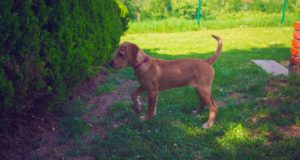 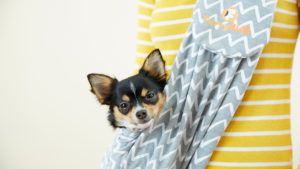 Carry Your Pet Hands-Free With a New Breed of Pet Carriers
Love having your pet with you while you’re on the go? Find out how to hold a cat or dog effortlessly with these comfortable alternatives to the traditional pet carrier.