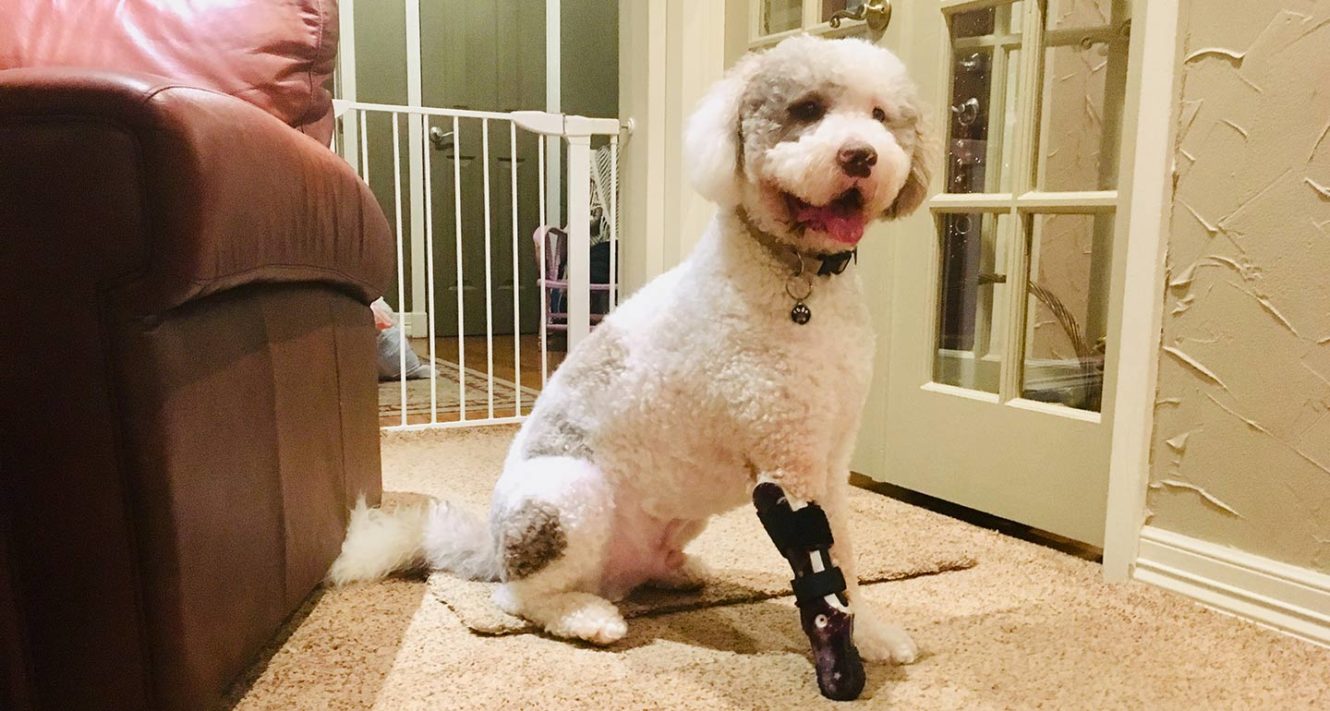 Last year, a 30-pound puppy named Will made his television debut in Animal Planet’s Puppy Bowl XV. Fans may remember him as the Poodle mix wearing a prosthetic paw—if they remember him at all. After all, he wasn’t exactly the MVP.

“He panicked,” says pet parent Bill Bickley, laughing as he recalls his dog’s stage fright. “The only noteworthy thing he did on the stage was poop.”

Today, Will is known as S’mores—and if his family has anything to say about it, his Puppy Bowl performance is just the beginning of his legacy. With Bickley, a prosthetics designer for humans and animals, by his side, S’mores is poised to become an advocate for pets with special needs. 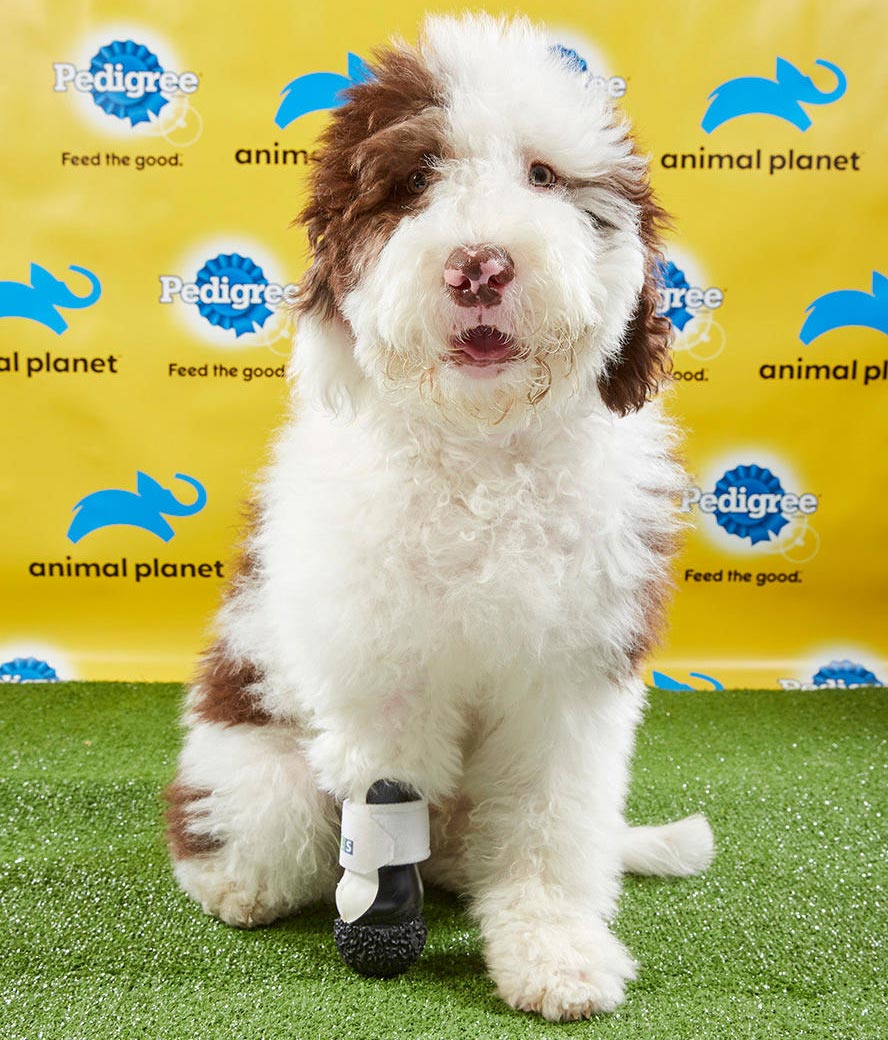 At the time of Puppy Bowl XV, Bickley hadn’t yet permanently adopted S’mores. He initially took in the pup on a temporary basis in order to provide him with prosthetics, inspired to take action after hearing about S’mores’ tragic beginnings.

“He was born with a congenital birth defect—basically, he was missing his paw from birth,” says Bickley, who lives in Houston, Texas.

But that relatively minor defect almost cost S’mores his life. Rescuers believe S’mores was born into the care of a breeder who abandoned both him and his sibling, who also had a birth defect.

“A backyard breeder in Arkansas just threw them away because they were unsellable,” Bickley says. “Someone found them near death in a box in the woods.”

Ultimately, S’mores’ sibling’s life couldn’t be saved. “S’mores was that same level of critical,” Bickley says. “He was that close to passing away.”

Instead, he was taken in by Doodle Rock Rescue in Dallas, Texas. In August 2018, after it was clear that S’mores would survive, the rescue asked Houston PALS (Pet Artificial Limbs & Supports), the pet prosthetics company Bickley founded, to make him a prosthetic limb. 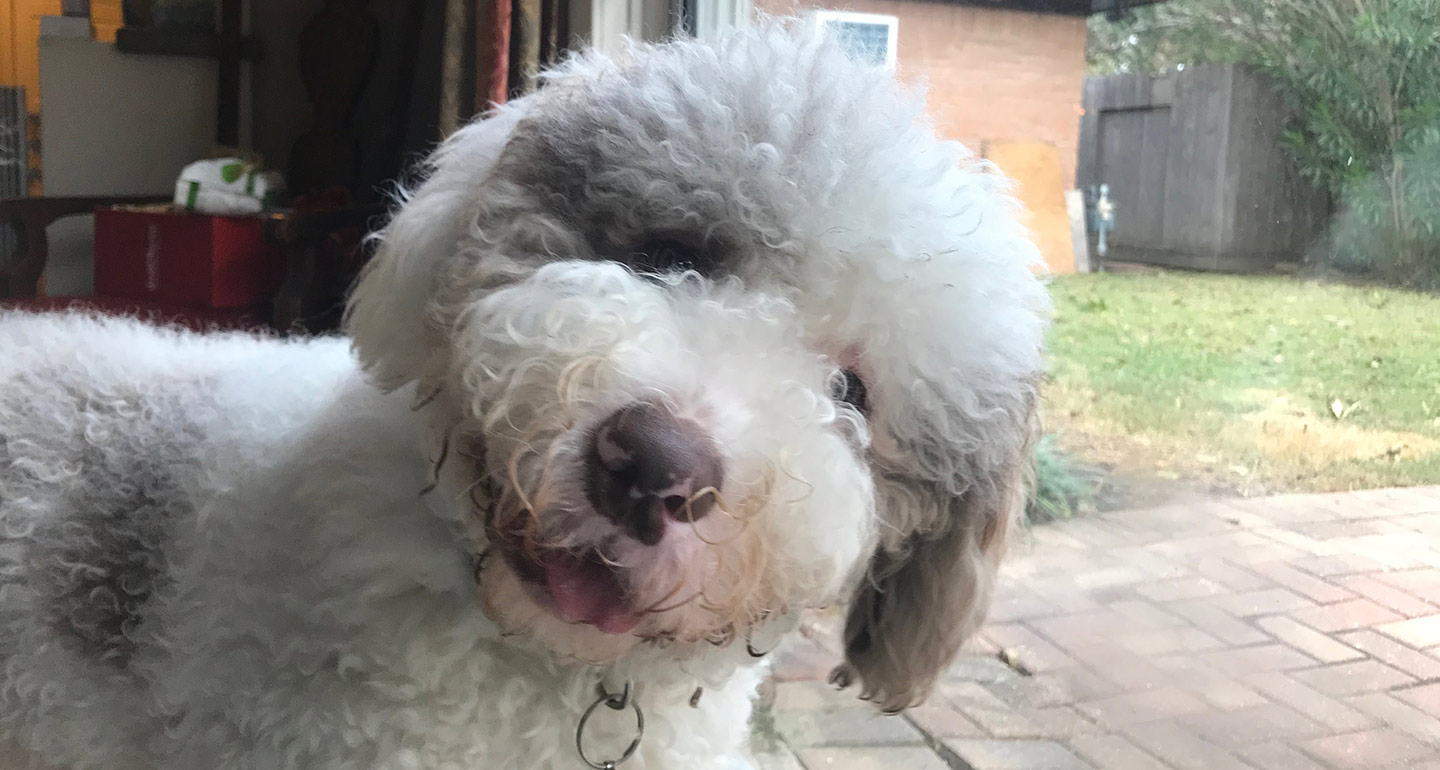 At the time, Bickley had no plans to adopt another dog. Two weeks before he got the call about S’mores, his wife and kids had adopted an 8-year-old Poodle named Snickerdoodle. They were all still settling into their new routines with their newest family member. Still, Bickley agreed to foster S’mores temporarily, so that it would be more convenient to tweak the equipment he needed.

“The idea was to get him through his young life as cheaply as possible for the rescue,” says Bickley, who has 25 years of experience crafting prosthetics for humans as well as the 5 years he’s spent creating limbs for dogs and other animals. “As a puppy, we knew he was going to grow fast, so we didn’t want to make him permanent prosthetics [right away].”

Instead, Bickley planned to make a series of temporary equipment that would essentially grow with the dog.

“I figured it would be easier to do in-house,” Bickley says. “So I said let me foster him—and the rest is history.” 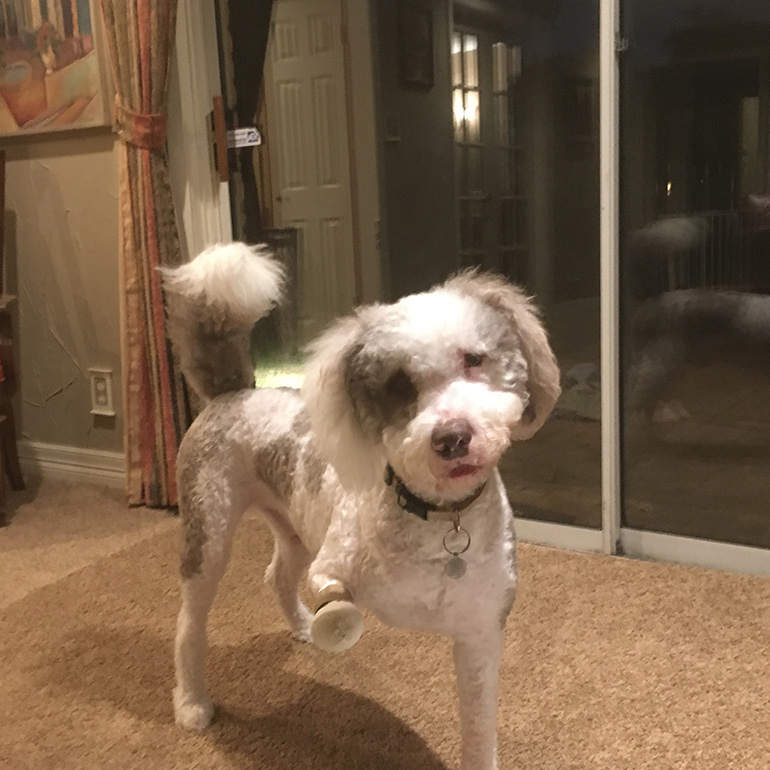 S’mores was still in Bickley’s foster care when he was invited to participate in Puppy Bowl XV, which was filming in New York City. By then, S’mores had grown to 30 pounds—too big to travel in the cabin of most airlines. Instead, Bickley drove S’mores all the way from Houston to the Big Apple for the taping—a 1,600-mile road trip.

When they finally arrived, Bickley was wowed by the spectacle of the Puppy Bowl—the nondescript building in Manhattan with super-tight security, the giant holding area with dozens of puppies, the bright lights and atmosphere of adorable chaos.

S’mores, on the other hand, was out of his element.

“In our house, he chases everything. He plays keep-away with Snickerdoodle. But when he got [to the Puppy Bowl] … he froze and he didn’t want to do any of that stuff,” Bickley says.

Still, S’mores made an impression: The Puppy Bowl XV awarded him that year’s Underdog Award, which honors dogs who participate in the Puppy Bowl in, well, their own special way.

A year later, S’mores is almost 2 years old, and has grown into a playful, friendly, and undeniably unique dog—and not just because he’s missing a paw.

“S’mores definitely has a bizarre personality. He’s very chatty, very vocal,” Bickley says. “I play with him and it sounds like he’s just super mad. He can sound very guttural and growly, but he’s never nipped or bit anybody. He just wants to be heard.”

After bonding on their cross-country road trip, Bickley and his family permanently adopted “Will” soon after the Puppy Bowl. They changed his name to S’mores, Bickley says, to match the dessert theme of their other dog’s name, Snickerdoodle. Today, the two are best buddies. 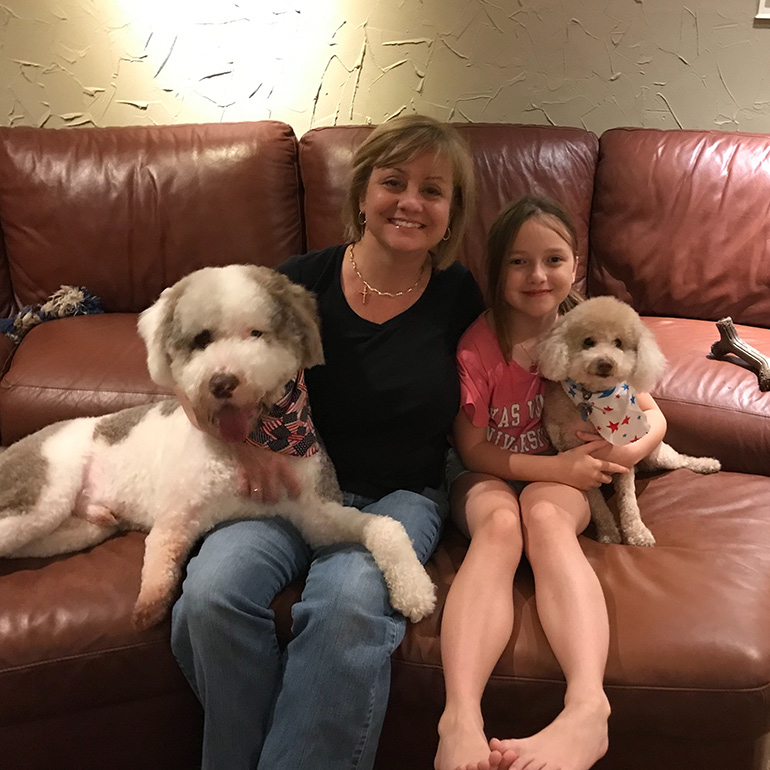 Despite his Puppy Bowl stage fright, S’mores was born to be noticed. He made tons of friends during his New York road trip, Bickley says, impressing strangers with his friendly personality and his natural use of his artificial limb. And he’s continued to make a difference after the big event. In 2019, patients at the Texas Institute for Research and Rehabilitation (TIRR), a medical center for people who have suffered brain injuries or who have other neurological issues, got to see S’mores in action. He participated in a “patient rodeo,” a meet-and-greet event introducing TIRR’s patients to differently abled animals. As Bickley describes it, S’mores was “an inspiration.”

“People rolled up in wheelchairs or other mobility devices, and they wanted to hang out with him,” he says. “Have you ever seen a dog do a full body wag? That’s S’mores. When he sees somebody new, he can’t stop … People love it.”

The Friendly Face of Animal Prosthetics

Over the past year, Bickley says, S’mores has “definitely matured. He’s kind of like a cat; he’s going to be in your lap even if it’s not comfortable.” Sure, he’s a 60-pound dog—but Bickley says he still spends many mornings snuggling with S’mores over his morning coffee. 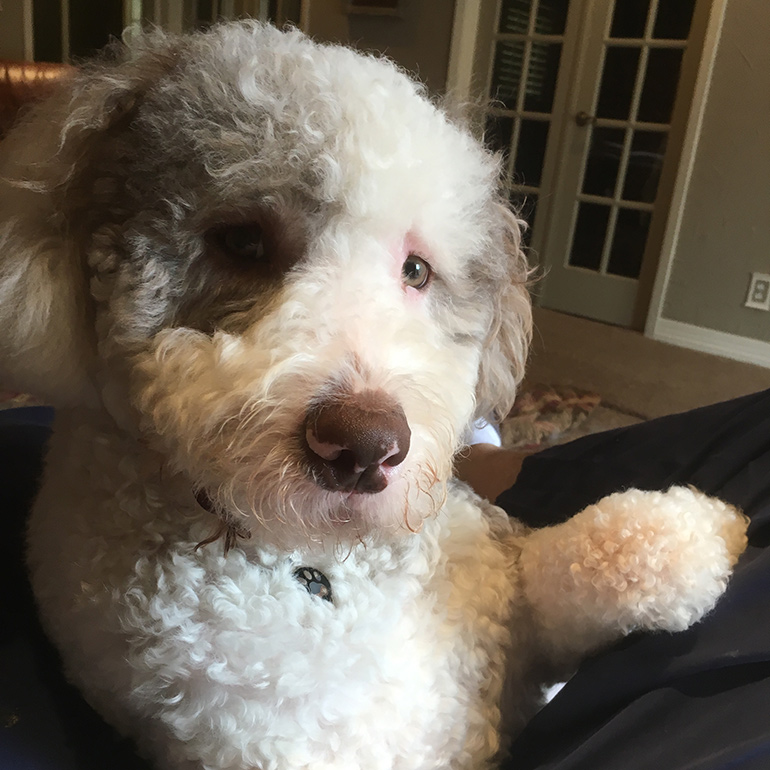 Bickley is also planning to involve S’mores more in his day job. He’s in the middle of expanding his prosthetics workshop to include a play area for dogs, which will double as a place for S’mores to hang out while Bickley is working. It’s a way to continue socializing S’mores, Bickley says, and also a way to show his patients—and the rest of the world—the power of animal prosthetics.

“The goal for us moving forward is to get him out and seen more,” Bickley says, “to bring a smile to people’s faces. I think a lot of people are surprised that he’s doing as well as he is. He’s really a perfect ambassador for our industry … [Dogs] can get along well on three legs, but [prosthetics] have the ability to give them back a fourth [leg] and spare them the arthritis and everything else that happens down the road.

“It’s important to show the success stories of dogs with prosthetics,” he says, “and S’mores is definitely a success story.”

By: Ciara LaVelle
Ciara LaVelle is a writer, editor and mama to two tiny humans, rescue pup Zeno, super cat Manny, too many fish to name, and a garden full of succulents. She lives and writes in South Florida. 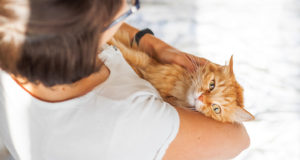 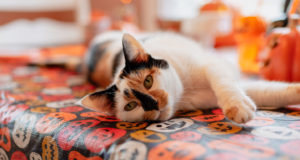 100 Halloween Cat Names
Are you searching for Halloween cat names for your new pet? We’ve got you covered with a list of 100 spooky cat names inspired by your favorite holiday.