In 1985, musher Libby Riddles made history as the first woman to win the Iditarod Trail Sled Dog Race.

Known as “The Last Great Race on Earth,” the Iditarod started in 1973 and takes place in Alaska every spring. Mushers and their team of dogs trek across roughly 1,000 miles of frozen tundra, from Anchorage to Nome, over the course of several days.

The year she won, Riddles and her team of 16 dogs braved frigid temperatures and a fervent storm to cross the finish line. Though she trained mentally and physically to prepare for the event, Riddles attributes her victory to one thing: her dedicated team of Huskies.

Pet Central caught up with the Iditarod champion to hear about some of the challenges she faced during the 1985 race, why she fell in love with sled dog racing and the shocking amount of calories an Iditarod dog eats while out on the trail.

What made you fall in love with sled dog racing?

I knew I was always going to have animals. As a kid from the Midwest, I fantasized more about cowboys and Indians and being a cowgirl, but then this whole Alaska thing came up and I saw pretty quick [that] you could have 40 sled dogs, and nobody thinks you’re crazy … I just kind of liked them. I was actually more of a cat person, but I liked Huskies because they are more independent, and you have to really [earn their] trust to win them over and work with them.

I’ve been mushing dogs for over 45 years myself. Can you think of anything more Alaskan than mushing a team of half-crazy Huskies a thousand miles through the woods in the middle of the winter? It doesn’t get more Alaskan than that.

What were some of the challenges you and your team faced during the 1985 Iditarod?

I pulled over on the side of the trail, put in the snow hooks and tied it off to a tree. Everything [was] going great until three teams in a row [came up and] passed us.

My one leader, Bugs, especially hated having anybody pass us. So, he got everybody up on their feet, and they [were] all pulling as hard as they [could] against the knot I tied around the tree. That knot was so jammed up that Superman couldn’t have gotten it out!

I’m thinking, ‘How do I get out of this and save the rope? I’ll take my axe, cut down half the tree that I tied the rope to [and] jump back on my sled.’

Of course, they broke [the tree] while [I was] chopping on it. I came close to catching the sled—I caught the piece of tree that was tied to the rope [and] the sled. I [was] dragged on my face for like 3 miles behind that dog team, and I was yelling at the top of my lungs the whole time just hoping they might actually stop. They didn’t even slow down.

Finally, I lost my grip, and there [went] my beautiful team without me on the first day of the Iditarod. That was one of the worst days of my life. Lying face down in the middle of the trail after being dragged for miles, I thought, ‘I just wasted the last four years of my life it took to come back and do my best in this stupid race because I’m a moron. I screwed up. I should just go home.’

[Then I remembered,] ‘Hey, wait a minute, I have to go help my dogs!’ I shut up, got up and started running after [my] dog team. I had to know I tried everything I could.

Ninety-nine percent of the time in the Iditarod, you have to get yourself out of whatever predicament you get yourself [into] out there. [And] as competitive as we are [while] out there racing, we all help each other. My dogs went 5 miles and bumped into another racer. He tied the dogs up, so they were safe. I ran down the trail for half [an] hour. Another racer came and gave me a lift to find out what happened to my dog team.

That day I went from thinking [that] the whole thing was over [and] I was going to have to quit and go home [to reuniting] with my team and winning the race. What a way to learn that when things look impossible, just keep going for it and maybe you’ll get lucky!

Do you raise your own dogs?

Yes. Most of us raise our own dogs from puppies. From the time they are small, we show them we are fair, we are patient, we are consistent. [They] can trust us; we know what we are doing.

But it has to be a two-way street. There are times when you are out there mushing in blizzards when you can hardly see your dog team, and you’ve got to go anyway. When it’s like that, it’s my turn to trust the leaders. They have senses for finding the trail that I don’t. We’ve got to work together, even just to make it all the way to Nome.

What kind of dogs do you look for when preparing your team?

For the Iditarod, you really don’t want a dog that’s a super hard worker. The older dogs are really good because they know how to pace themselves. So, if it’s easy going, the old dogs just go along; when they hit a hill, they kick in on a hill, but that helps them be able to last the whole distance. A good Iditarod team on a flat nice trail can trot 12-14 miles per hour.

Tell us about the dog team that helped you to win the Iditarod.

It was a combination of my dogs and fellow musher, Joe Garnie. We had two kennels to pull from and combined the best dogs.

Joe’s dogs were more of a straightforward kind of Husky—really tough. I had these crazy, screaming, really enthusiastic hound-type dogs. It was a good mix between both of our dog teams. Plus, all of the puppies grew up together in this northern climate, so they were kind of used to it from the start. And with all growing up together, that’s helpful with making it a cohesive pack.

I had a couple sets of sisters, four brothers and a lot of related dogs. They just had the right kind of upbringing. Everything was geared not just toward racing; we did real work with the dogs. We went hunting with them, we got firewood with the dogs, we traveled to see friends with the dogs and then racing was another part of that. We did a lot of bonding prior, too. You have to have a lot of trust with these dogs to do the kind of stuff that we are doing with them.

How much dog food do your pups eat during a race?

On these races, one of the most scientific parts is having a balanced, super-concentrated food for these dogs. We’ve got mushers who are veterinarians who have created dog foods because they have raced on the Iditarod. [We try] to jam 10,000 calories a day into a 50-pound dog. We train them when they are little, and they happily inhale every little bit of food in sight. And 10,000 calories are a lot!

What happens if a dog gets injured during the race?

If one of your dogs catch a bug from another team, like a team from Norway or Minnesota, or it gets in a moose hole or [starts] limping, we carry that dog in our sled until we get to the checkpoint.

There are at least three veterinarians at every checkpoint and a whole group of volunteers who take care of these dogs that are sent home. And if we send a dog home, we continue with one less dog.

How many dogs do you currently own?

I only have 20 dogs. I haven’t been raising dogs for quite a while. I want to keep it small.

Instead I’ve just been picking up one or two every couple of years. I want to have enough to have a couple of eight-dog teams to run around for fun.

Do you have any advice for young women who want to compete in the race or take up the sport of mushing?

I always tell people, if you are really thinking about doing it, it might be good to work with a kennel first and really make sure that you want to make the commitment, because once you get the dogs, you are responsible for their lives.

Nicole Pajer is a Los Angeles-based freelance writer and the proud owner of a Doberman who never runs out of energy and a rat terrier who excels at breakdancing. In addition to Chewy, she writes for The New York Times, Parade, HuffPo, Woman’s Day, Billboard, and more. Keep up with her adventures on Twitter @NicolePajer 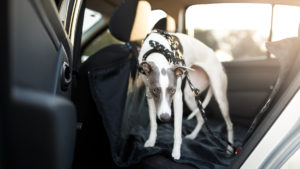