A hot bath is soothing and relaxing — a great way to kick back and forget about the anxiety of the day. A bath for your dog, on the other hand, is probably the source of some of that anxiety.

The fact is: your dog doesn’t want to be washed just as much as you don’t want to wash him. It doesn’t have anything to do with actually being clean and smelling fresh, but rather the lack of agency that comes with a hop in the tub, says Katelin Thomas, an associate certified dog behavior consultant and owner of K9 Turbo Training in Michigan.

“Think about how invasive it is and how quickly the owner wants to get done,” Thomas says. “There’s not much choice there for the dog. Choice empowers them and makes them feel in control.”

It takes time to help your dog feel like bathtime is another fun part of her day, but the payoff to all that preparation is that the water will mostly stay in the tub and your dog will now feel as calm as she is clean. So, how can that be achieved? Here are eight tips to make bathtime less stressful for both you and your pup.

A truly stress-free—or as close to stress-free as you can realistically expect—bathtime doesn’t happen overnight. You’ll have to start by teaching individual behaviors that, when put together, will make bathtime both successful and enjoyable, Thomas says.

“Teach your dog to jump in and out of the tub. You’ll need that later,” she says. “Then, move on to teaching her to stay still while the water is running.”

Arguably the most important behavior you want to teach them is how to love the water. Thomas says doing this in a low-pressure place, like a small lake or a kiddie pool, is perfect and that you should let the dog take as much time as she needs to get in and have fun.

Feed Your Dog in the Bathtub

Several secrets to stress-free bathtime involve creating positive associations with the activity. Thomas says occasionally feeding your dog in the bathtub — including in the morning on the day of the bath — will make her enjoy that space more than she might if all she thinks of it as is the scary, constrictive place where she gets all wet.

Give Her Exercise Before the Bath

You’ll need to block off the better part of an entire evening the day of the bath. Thomas says this includes about an hour of actual bathtime to make the dog comfortable.

“One of the biggest problems with bathtime is that people rush the dog,” she says. “They want her to hurry up, get in, and get out. If you pick a time when you can go at the dog’s pace, that’s extremely helpful, just like a human overcoming a fear.”

Additionally, you’ll want to block off more time than usual to exercise the dog before the bath.

“Walking them ahead of time is a good idea so get some energy out, as long as that’s something that usually makes them calmer and doesn’t stress them out,” says Toni Young, owner of Wags My Tail Pet Grooming in Tucson, Arizona.

And Play After the Bath

Thomas says sandwiching bathtime in between two bonding activities creates a positive association with bathtime itself. In addition to the long walk before the bath, she says you should spend some time playing after the dog dries off.

Reward Her During Bathtime

During the bath itself, it’s important to be very generous with high-value dog treats, Thomas says. Whenever your dog does something well (like sits still during shampooing), give her a small amount of a favorite snack, like boiled chicken or peanut butter.

One trick Thomas suggests to help keep the dog in place is to smear some peanut butter on the wall in front of her.

“While she licks it, her head is up, and she’s not pushing past you,” Thomas says. “It’s messy, but it’s also incredibly helpful to have her distracted in a position that’s easy to wash her.”

All the preparation in the world won’t help if the water is too hot or too cold, Young says.

The ideal temperature will vary from dog to dog, but generally speaking, a dog’s tolerance is closer to that of an infant than it is an adult human, she adds. “If it’s too hot for you, it’s definitely too hot for your dog.”

Use the Right Shampoo

Young says one of the biggest mistakes people make when washing their dog themselves is using human shampoo instead of a high-quality dog shampoo.

“The pH of their skin is very different, and when you use human shampoo, you can really dry out or irritate the dog’s skin,” she says.

Another common shampoo problem is not having it nearby when you’re in the middle of the bath.

“If you try to run away to get something, your dog might try to follow you,” Young says. It’s a recipe for a giant puddle on the floor of your bathroom.

For the right type of dog — one that’s well socialized at a young age, Young says — a trip to the groomer can be quite fun. There, they’ll get to interact with other dogs, and professionals will attend to their needs in careful, comforting ways. Sounds good for you, too, right?

You need to know if this is right for your dog, however. For those who get nervous being around others, bathtime is stressful enough and having a stranger give a bath can be a nightmare. Even worse, Thomas says it can create a negative association with broadly related activities like blow-drying or even going in the car.

If this is your dog, you need to clean her yourself. Follow the advice above, and you and she should be clean and happy.

John Gilpatrick is a freelance writer who thinks bunnies make the best pets. 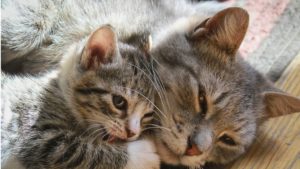 Our Kitten Harasses Our Cat
Find five ways to occupy your new kitten while saving your older cat's sanity.
Up Next

Why Do Cats Scratch?
Why do cats scratch? Find cat behavior and cat psychology answers for this natural cat instinct and kitten behavior with expert, Veterinarian Dr. Conrad.