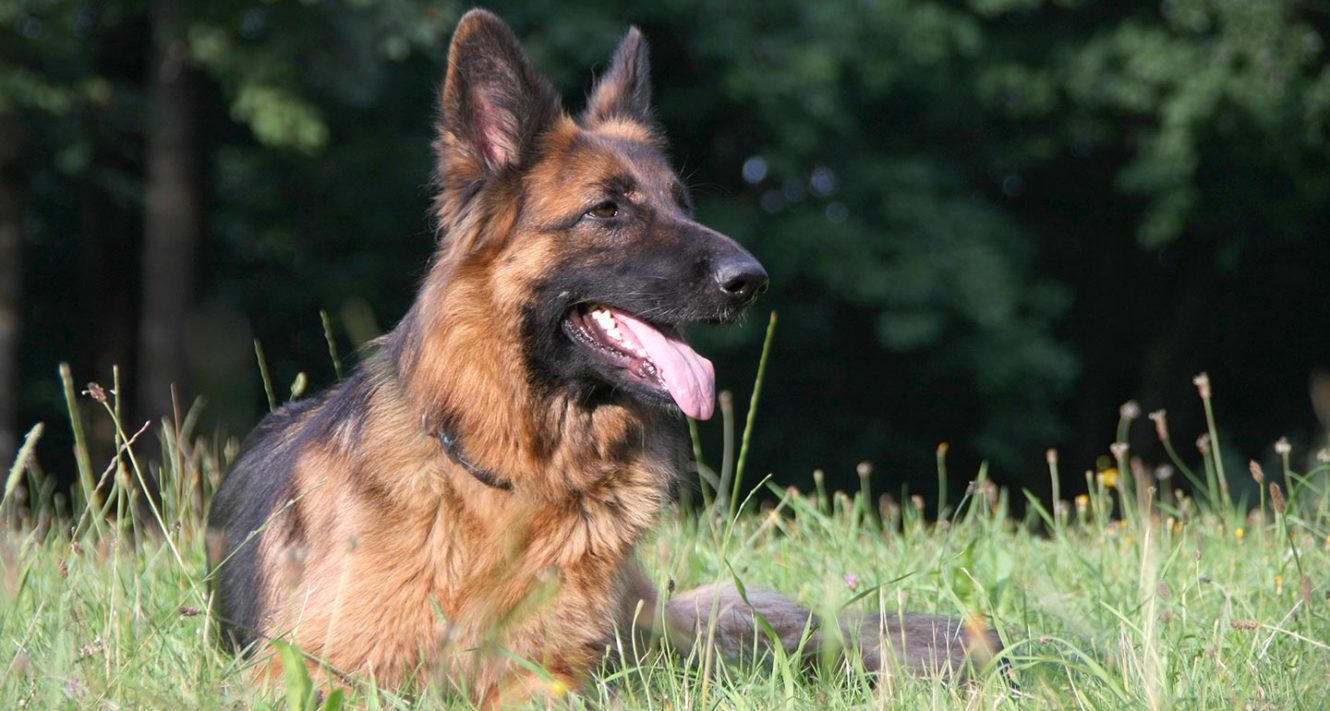 German Shepherds can do any type of job known to dogs. Originally bred in Germany as sheep herding dogs, these powerful, smart canines quickly took on other roles, such as guide dogs for the blind and disabled, K-9 partners to the police and military, and therapy and search-and-rescue dogs. These fierce-looking pups can be gentle homebodies, too, but they need a job to do, even if it’s just moving through an agility course or tracking a scent. That should be easy—the German Shepherd Dog breed has the reputation of quickly learning new skills, making these canines easy to train.

The German Shepherd Dog breed (GSD) is canine royalty—and these dogs know it, too. They are large, athletic and speedy, covering a large amount of ground with a minimum of effort. We know they’re bigger dogs, but exactly how big do German Shepherds get? An adult German Shepherd can reach 90 pounds and stand more than two feet tall. Similar to other larger-sized dog breeds, the German Shepherd life span averages about seven to 10 years.

The German Shepherd as we know them appeared at the end of the 1900s, when a German cavalry officer named Captain Max von Stephanitz crossed a variety of herding dogs to get the ideal sheep herder. He spent the next 35 years promoting the German Shepherd Dog breed, calling it the ideal dog for any type of job, from police work (they made up the original K-9 units in Germany) to farm work.

In World War I, German Shepherds were the German army’s best friends—they were messengers, guard dogs, carried ammunition and guided wounded soldiers to safety. The British and Americans reportedly were so impressed by these dogs, they started to breed them, too.

One of the most famous German Shepherds the world over was Rin Tin Tin, who’d been brought over from France by an American soldier named Lee Duncan. Rin Tin Tin starred in 27 movies in the 1920s and popularized the breed as a pet. Today, German Shepherds are the second most popular dogs in the U.S., according to the American Kennel Club (AKC).

Ready to add some German Shepherd puppies to your pack? Pick a reputable German Shepherd breeder so you’ll get a healthy pup with a good temperament. German Shepherd prices vary greatly, but expect to pay an average of around $1,000 to $2,500 for your new furry family member. You can also consider adopting from a German Shepherd rescue, or keeping an eye out for the breed at your local animal shelter.

You can’t mistake the German Shepherd Dog breed. From the tips of their pointed ears to their long bushy tails, German Shepherds are noble-looking dogs. They have long, pointed muzzles and almond-shaped eyes that typically are dark brown in color. German Shepherds are longer than they are tall, and their bodies are powerful and muscular.

A word about those pointed ears: GSD parents always want to know when do German Shepherds’ ears stand up, since, as puppies, these dogs have floppy ears. Their ears start to stand up, occasionally at first, when they finish teething, usually between 16 and 20 weeks.

These dogs sport a double coat of medium-length, with shorter fur on their heads and paws, and longer, thicker hair on their necks and hind legs. That coat comes in all sorts of colors, from jet black German Shepherds to white German Shepherds. In between are the bi-colored dogs, of which the most common are the black and tans. They also feature black and silver and black and cream coats, all of which are recognized by the AKC. 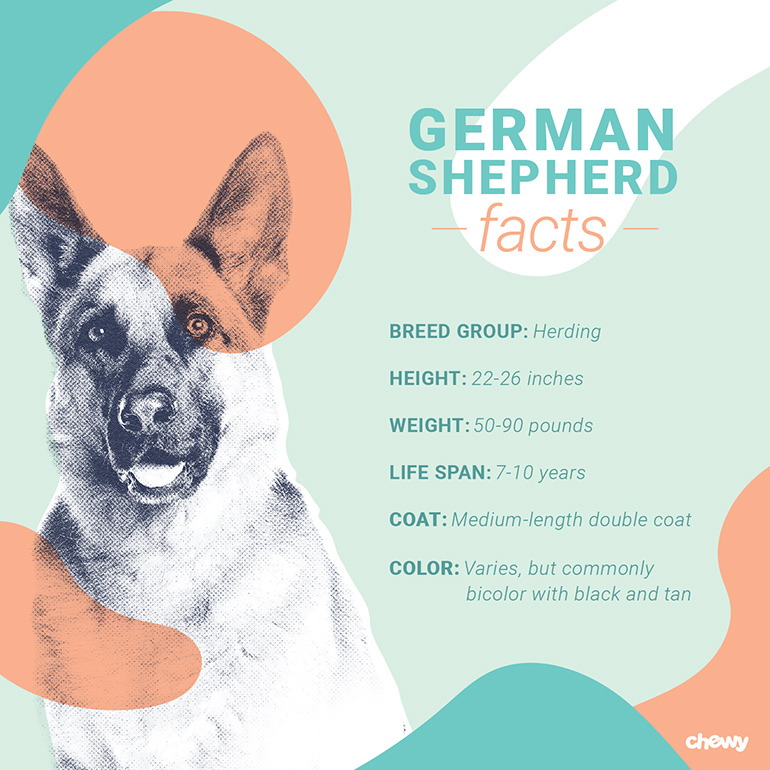 Because this watchful, self-assured breed is nearly unmatched in intelligence, German Shepherds excel in high-pressure jobs that require next-level problem solving, like search and rescue or police work. These extremely confident dogs are also keen observers and thinkers who have an uncanny ability to make decisions and problem-solve on the fly. They’re lauded for their courage, which is another trait that makes them a versatile working companion. Though German Shepherds might seem aloof around strangers, they bond easily with their families and are incredibly loving companions.

A hallmark of the German Shepherd temperament is great loyalty to their people. For that reason, they’re a fantastic match for families who have the time to devote to training and exercising them. Known to be protective of their family and territory, thorough socialization at a young age is important to prevent reactivity to people and other dogs. Though the breed is recognized for that intelligence and stoic German Shepherd temperament, they’re also sweet, fun-loving companions who can be silly and playful as well. So, are German Shepherds good family dogs? Yes! These pups are wonderful family dogs when matched with a household that understands their needs.

Keeping German Shepherd Dogs Healthy: 5 Issues to Watch Out For

While these dogs are known to be relatively healthy, there are a few health problems specific to the GSD of which pet parents should be aware. By recognizing German Shepherd health issues early on, you can seek treatment sooner. And when choosing a German Shepherd breeder, be sure to ask about any known genetic health problems in their breeding dogs.

Hip dysplasia and elbow dysplasia are diseases that lead to irregular growth and development of the hip and elbow, which can predispose the joint to early onset arthritis. Joint dysplasia can be inherited from the dog’s parents and made worse with improper nutrition and exercise.

Bloat is an emergency, life-threatening condition that affects deep-chested dogs like German Shepherds. This condition causes the stomach to twist and lose blood supply, which can lead to death if not surgically treated immediately. Bloat can be prevented surgically and by feeding multiple, smaller meals.

Learn more about the signs and symptoms of bloat in dogs here.

Degenerative myelopathy is a progressive, incurable disease in which the nerves of the spinal cord cease functioning, leading to loss of mobility and feeling, first in the back legs, and then in the front legs.

Megaesophagus is a debilitating genetic condition that affects the esophagus, the tube that connects the mouth to the stomach. Affected dogs regurgitate food after eating, and puppies with megaesophagus usually are the runt of the litter or exhibit a failure to thrive.

The symptoms of perianal fistula include draining wounds on the skin surrounding the anus, straining to defecate, excessive licking at the affected area, diarrhea or bloody stool. The disease has been compared to Crohn’s disease in humans. Treatment is available, and may include therapeutic foods, such as Blue Buffalo Natural Veterinary Diet NP Novel Protein Alligator Grain-Free Dry Dog Food, to address possible food allergies.

Caring for Your German Shepherd Dog

German Shepherds are very smart and easily trainable large breed dogs. Here are the basics on how to take care of your German Shepherd Dog.

It is crucial to not overfeed German Shepherd puppies because it can predispose them to health problems. Roly-poly puppies aren’t healthy—they are overweight. You can avoid many future problems by feeding German Shepherd puppies appropriate amounts of large-breed puppy food, like Purina One SmartBlend Large Breed Puppy Formula Dry Dog Food. Use the feeding chart on the bag as a guide, or ask your veterinarian how much to feed your particular puppy.

If you choose to cook at home for your dog or feed raw dog food, consult with a veterinary nutritionist to formulate a complete and balanced diet.

The smart and active German Shepherd Dog breed requires a lot of daily exercise, both physical and mental. Plan to spend at least 45 minutes of every day with your adult German Shepherd vigorously walking or running, playing games and/or training. If your German Shepherd enjoys water, teach them to swim (they are not natural-born swimmers) for a fantastic low-impact exercise.

Exercises such as agility, herding or flyball provide both physical and mental exercise for this intelligent and agile dog. Then you can supplement with interactive dog toys, learning tricks and playing games like hide-and-seek.

German Shepherd puppies require less-strenuous exercise than adults in order to grow properly, so talk with your veterinarian for exercise recommendations for your pup.

Thanks to their breeding, German Shepherds are creative thinkers and they require consistent and ongoing education to keep them constructively engaged. Left to their own devices, German Shepherds can use their great intelligence for less-than-desirable purposes, like destructive behaviors.

The mental exertion that occurs during training helps, as well as training games that utilize their natural abilities. Channeling their energy into tracking games that resemble search-and-rescue efforts or scenting games like “find it” can make the average family German Shepherd feel like they’re on the job.

German Shepherds are willing to serve their pet parents, so if you decide to get one, put yours to work! They don’t have to be a search-and-rescue dog, but training your pup so they can master the agility course or “listen” as kids read to them in the library will challenge their mind and their body, and keep them happy, healthy and active. 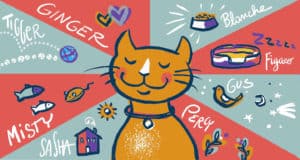 The Best Cat Names: 225 Cute, Funny and Unique Cat Names
Looking for the best cat names to suit your new kitty’s personality? These monikers are the cat’s meow.
Up Next 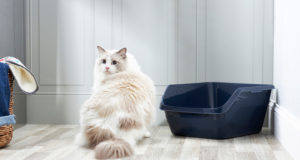