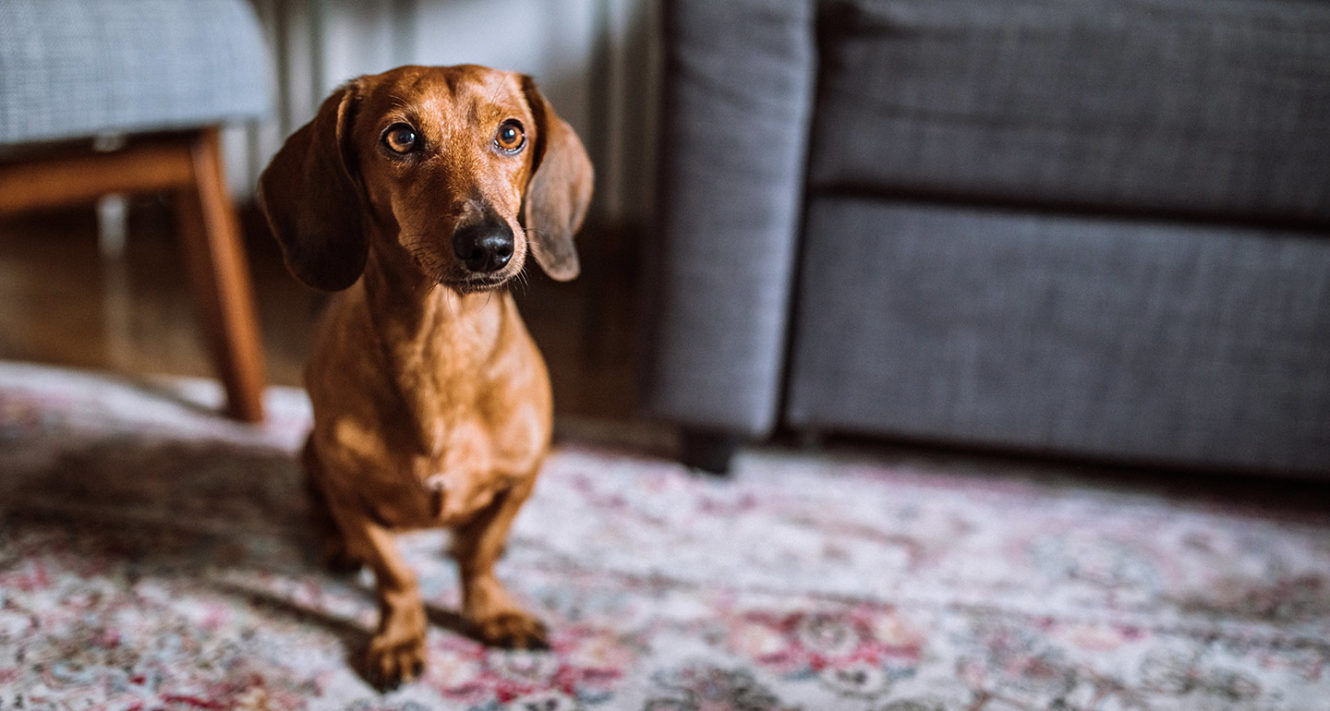 With a distinct, low-slung body and delightfully floppy ears, the Dachshund was originally bred to hunt and burrow after badgers and other small prey animals. That funny looking body has earned them the nickname of hotdog or wiener dog. But don’t be fooled by their petite frame: These smart pups can make excellent watchdogs with a big bark (and equally big personality) that seems to belong to dogs two or three times their size.

There are two types of Dachshunds: the standard Dachshund and miniature Dachshund. Both come in three coat varieties and in an array of colors. How big do Dachshunds get? Neither the full-size Dachshund nor the mini Dachshund should grow over 32 pounds.

The Dachshund’s origin dates back to Germany, where these short-legged hounds emerged about 600 years ago. Like all hounds, they were used for hunting, specifically for chasing down badgers and rabbits. Dachshunds were tunneling dogs—designed to dig the petite prey out of their dens (in fact, the word “dachshund” means badger dog in German), and they were prized for their keen noses, their stick-to-itiveness and tracking abilities. Along with that came a big personality, including such loved traits as their bravery, loyalty, obedience (a must in hunting breeds) and friendliness.

Doxie dogs first came to the U.S. in the 1880s and, for a time during World War I, were known as Liberty dogs. They were popular from the get-go, often appearing in the top 10 breeds, although they now rank 12 in popularity, according to the American Kennel Club. How much do Dachshunds cost? Today, your pup probably will set you back at least $1,500 if you work with reputable Dachshund breeders. You also can try getting your Doxie dog through Dachshund rescues or from your local animal shelter.

Wiener dogs look a lot like their nickname. They have bodies that are long and low to the ground with short, powerful legs. They have long, pointed muzzles, almond-shaped eyes and round, floppy ears. Dachshunds are large-chested dogs with big, full barks that were designed to be heard by hunters as their dogs tunneled after prey. The Doxie’s long tail extends straight out.

Whether they’re full-sized or mini Dachshunds, their coats can be wiry, long haired or smooth. Long-haired Dachshunds sport sleek, slightly wavy fur that requires more brushing than their smooth-coated counterparts. Their coat colors can be solid (usually red or cream) or two-toned—cream or tan and black, chocolate, gray (aka blue) or fawn (aka Isabella). Smooth-coated dogs, or short-haired Dachshunds, have shiny, sleek coats that are easy to clean and maintain. They come in the same colors as the long-haired Dachshunds, except they occasionally come in a shade called wild boar. Wirehaired coats are double-coated Dachshunds with a short, coarser topcoat and a sleek, smooth one underneath. The most common colors in wirehaired Dachshunds are wild boar, red, and black and tan.

Whatever coat type or size, these compact dogs have intelligent faces and expressive eyes, and they carry themselves with a confident air. After all, they know their worth! 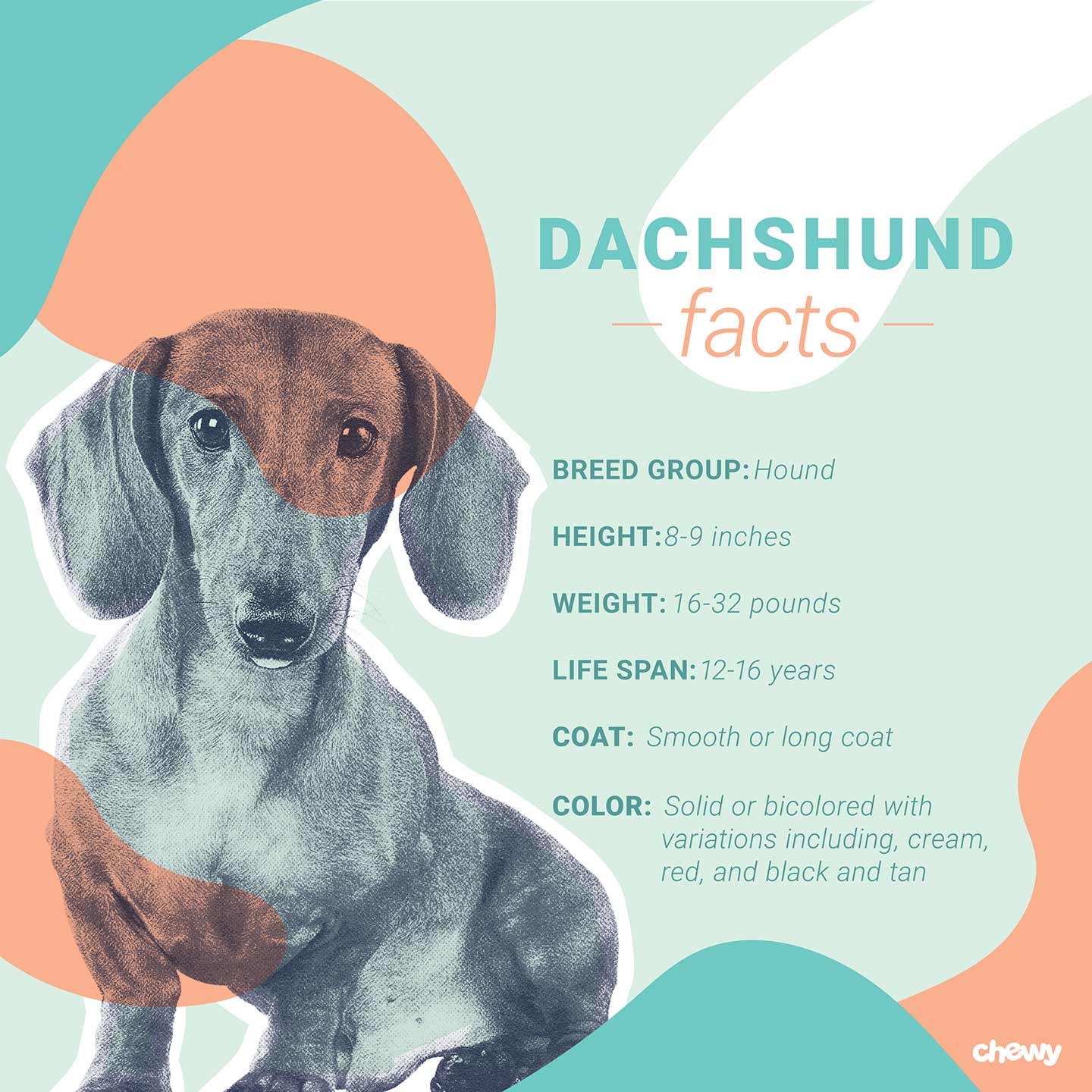 Dachshund Temperament: A Big Personality in a Petite Package

Dachshunds are clever, energetic and entertaining. They tend to pay a lot of attention to their surroundings and will bark to let you know when “interesting” things (to them, at least!) are going on. In other words, Dachshunds bark a lot. If you need a good watchdog, a Doxie dog might be a great match for your home.

The Dachshund temperament generally isn’t shy. Dachshunds will run right up to a big dog to tell them who’s boss, and if a Dachshund feels threatened, they won’t hesitate to use their teeth. Because of this common Dachshund characteristic, if you’re wondering if Dachshunds are good with kids, know that this breed may not be the best choice for a home with young children.

Dachshunds like to interact with their humans and are quite playful. They can be taught a variety of tricks and games through positive reinforcement. Like most scent hounds, Dachshunds use their nose a lot, both on walks and in daily life. This makes Dachshunds a great choice if you want to do any kind of scent work with your dog, but it means that walks will tend to involve more sniffing than walking—so if you’re looking to go on brisk walks for exercise, a Dachshund may not for you.

Keeping Dachshund Dogs Healthy: 6 Issues to Watch Out For

While Dachshunds are certainly tough little dogs, they are at a higher than average risk for a number of health problems, some of which can be minimized or prevented with proper care and breeding. If you’re considering adding a Dachshund to your family, be sure you choose a reputable breeder who makes breeding decisions based on the welfare of their dogs, or get as much medical history as your chosen shelter or Dachshund rescue group can provide.

Back problems are a nightmare for Dachshunds. Their elongated bodies and a genetic condition called chondrodystrophy (abnormal development of cartilage) puts them at high risk for bulging or ruptured intervertebral disks. Everyday activities can result in injuries, especially as dogs age, gain weight and/or lose muscle mass. A bulging or ruptured disk that presses on the spinal cord can result in loss of limb function, trouble with urinating and defecating, and pain that may or may not resolve with treatment.

Cataracts, an abnormal cloudiness to the eyes’ lens that makes it hard to see, frequently affect Dachshunds, particularly as they get older. Loss of vision associated with progressive retinal atrophy (PRA), on the other hand, is often seen in young or middle-aged pets. Dachshunds also can develop glaucoma, which is extremely painful due to increased pressure within the eye and may lead to blindness.

Dachshunds are at relatively high risk for hip dysplasia, a degenerative condition affecting one or both hips that leads to arthritis over time. In contrast, Legg-Calve-Perthes disease causes hip joints to degrade in very young animals. Patellar luxation (a kneecap that slips out of its normal groove) also is quite common in Dachshunds.

There are many causes for seizures, but when one can’t be identified, dogs are diagnosed with idiopathic epilepsy, which is thought to be primarily a genetic condition in Dachshunds. Veterinarians often take a wait-and-see approach when dogs have mild and infrequent seizures, but medications that help minimize seizures can be given when they become frequent or severe.

Many different hormonal disorders are diagnosed with some frequency in Dachshunds, including Cushing’s disease, diabetes and hypothyroidism. Some cases are associated with a dog’s lifestyle (overeating and obesity, for example), but genetics also can play a role.

Mitral valve dysplasia is a common form of heart disease in Dachshunds. Thickening of the leaflets of the heart’s mitral valve leads to a murmur and sometimes congestive heart failure.

Caring for Your Dachshund Dog

Because of their distinctive anatomy, taking care of a Dachshund presents some unique challenges. But with the appropriate care, the average Dachshund life span can reach 12-16 years.

Do Dachshunds shed? Despite their small size, both the short- and long-haired varieties do shed quite a bit. You can help minimize shedding by brushing your Dachshund daily with an appropriate tool for the dog’s coat. A stainless-steel comb like the Li'l Pals Double-Sided Dog Comb works great for long-haired Dachshunds, while a slicker brush or deshedding tool like the FURminator Hair Collection Dog & Cat Brush works better for short-haired Dachshunds. Wirehaired Dachshunds require a little extra coat care. They need regular trips to the groomer, plus you may want to trim their “fringes” (ears, eyebrows, beards) every few weeks to keep them tidy.

Learn how to brush your dog’s teeth here.

When Dachshunds are overweight, the likelihood of them developing back problems increases. An appropriate diet is important to regulate weight while providing enough micro and macro nutrients and energy to keep the dog healthy and happy. If your dog struggles to stay slim, look for foods that are nutritionally complete and balanced but not too calorie dense, like Blue Buffalo Life Protection Formula Small Breed Healthy Weight Adult Chicken & Brown Rice Recipe Dry Dog Food.

How much should a Dachshund eat? Your dog’s ideal food intake is determined by their caloric needs, which your vet can help you establish based on your pet’s age, size, activity level and other factors. Then, you’ll need to feed an appropriate amount of your food of choice to meet those caloric needs, making sure to factor in treats. A standard Dachshund’s weight shouldn’t typically exceed 32 pounds, while miniature Dachshunds typically weigh in at 11 pounds or under.

You also can choose a food formulated specifically for Dachshunds, like Royal Canin Adult Dachshund Dog Food, but it’s important to note that not every dog food is right for every dog. Also, be sure to keep foods you don’t want your dog to get into out of your Dachshund’s reach; they’re a notoriously curious breed and their hound noses can lead them right to forbidden food.

Because of their potential back issues, carefully moderate exercise for Dachshunds. They need enough exercise to maintain their weight and keep their muscles strong, but avoid exercises that cause strain on the spine, like leaps, jumps and twists. Leash walks of moderate length and speed generally provide sufficient exercise for most Dachshunds.

If you’re a new pet parent wondering how to train a Dachshund, begin by getting down to your dog’s level. Since Dachshunds are low to the ground, they can feel threatened when people bend over them. Training while you sit on the ground, or with the Dachshund on a couch beside you, can be helpful. Dachshunds may bite if they are threatened or trained using confrontational methods, so be sure to use positive reinforcement training. Think of training a Dachshund as teaching with kindness, rather than forcing compliance.

As you train, keep the Dachshund’s physical limitations in mind. As stated above, their long backs and short legs make the breed prone to back injuries. Also, beyond the normal sit, down and come, it can be helpful to teach your Dachshund that when people reach for them, treats follow. To do this, simply reach down to pet your Dachshund, then praise and feed them a small goodie. Your friends can do this too; pet the Dachshund, then praise and feed a small piece of a high-value treat, such as Stella and Chewy’s Duck Duck Goose Patties Freeze-Dried Raw Dog Food. Once your Dachshund learns that petting leads to treats, they’ll likely be much more relaxed about people looming over him.

While your Dachshund probably won’t be hunting down badgers, they’ll will burrow into your heart, as these friendly, sociable pups are eager for affection. To keep your Doxie dog happy, give them plenty of love, a couple of brisk walks a day and some games to put their nose and problem-solving skills to the test. Your reward will be a loyal, faithful companion. 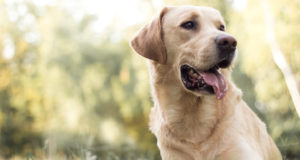 Labrador Retriever Dog Breed: Facts, Temperament and Care Info
Discover everything you need to know about the Labrador Retriever dog breed, including what their personality is like, their life span and training advice.
Up Next 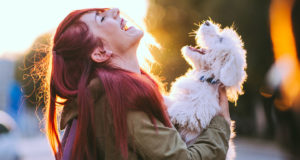